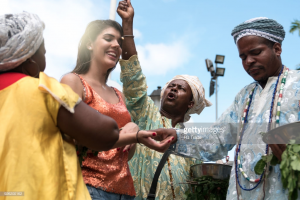 The kingdom of God, once established in a people group through a Jesus movement, becomes like an orchard. The community of believing households demonstrates God’s kingdom in ways that bear multiplying fruit. Yet this community of faith needs tending for greater fruitfulness. And it needs guarding against the deceitfulness and temptations of the enemy.

Three fourths of humanity lives in people groups where such an orchard has been established—where reproducing communities of believing households have potential to multiply and bear greater fruit.

The more mature orchards are in Reached People Groups—resulting from Jesus movements often spanning centuries—so that the gospel is well known and has significantly transformed these groups with the blessing of God. Within these groups, even those who don’t personally trust in Christ recognize that trusting Jesus is an accepted option within the norms of their group. Such orchards have matured to the point that they don’t generally need “outside assistance” from harvest laborers beyond members of their own group.

However believing households are practically non-existent in 60% of Unreached People Groups. In Romans 15:20, Paul referred to such places as still having no “foundation” upon which other ministry can build. He mentions and clarifies the idea of a foundation in a few other passages:

It has always been my ambition to preach the gospel where Christ was not known, so that I would not be building on someone else’s foundation (Rom 15:20).

By the grace God has given me, I laid a foundation as a wise builder, and someone else is building on it. But each one should build with care. For no one can lay any foundation other than the one already laid, which is Jesus Christ (1 Cor 3:11–12).

God’s solid foundation stands firm, sealed with this inscription: “The Lord knows those who are his,” and, “Everyone who confesses the name of the Lord must turn away from wickedness” (2 Tim 2:19).

25% of humanity lives in these Frontier People Groups (FPGs), where believers are less than 1 in 1,000 and there is no known Jesus movement. And less than 1% of harvest workers currently pursue Jesus movements among these people groups.

Only God knows all the places where believing households have begun reproducing; however the researchers at Joshua Project estimate that:

The responsibility for tending all orchards—to maturity, or in maturity—will continue until Christ returns.
These are the many pursuable ministries of the global Church, to be pursued in partnership with local believing households.

Within each people group, however, there is with one finishable task—establishing the first enduring and multiplying community of believing households as a Jesus movement, taught to obey everything Jesus commanded (Mt. 28:19–20).

There is a great imbalance today in the allocation of prayer, ministry and giving. Most of believer’s resources go to tending our own mature orchards among the 60% of humanity living in Reached People Groups. A much smaller portion goes toward strengthening the new orchards in the 15%. And almost none of the Church’s resources go to the remaining finishable task—starting Jesus movements in every Frontier People Group.

Jesus spoke favorably of leaving the 99 who are found to rescue the one that is lost.

What would Jesus say about this 25%—where the gospel is not yet known to be bearing fruit?

80% of the population of all FPGs (that’s 1.6 billion) are found in just a few hundred large, influential FPGs. As Jesus movements form in these largest FPGs, it will become much easier to start Jesus movements among the many smaller FPGs. 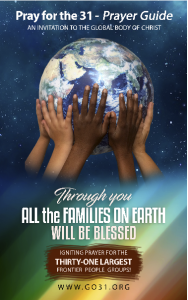 And nearly half the population of all FPGs lives in just the 31 largest groups, which are the focus of a monthly prayer guide.

Christ is calling His global body to complete the fulfillment of His promise to Abraham—to bless/disciple all the family-lines (peoples) on earth.

This starts in waiting on the Holy Spirit’s leading and empowering, just as the first disciples did in Acts.

Starting with reliance on the Holy Spirit, you and your family (or group) can play a key role in blessing any one of these strategically large, neglected Frontier People Groups.